Turkey seems to have different idea’s….

And are crowing that they got over on the American President….

Vice President Mike Pence on Thursday agreed to a deal with President Recep Tayyip Erdogan that accepted a Turkish military presence in a broad part of northern Syria in exchange for the promise of a five-day cease-fire, completing an abrupt reversal of American policy in the Syrian conflict.

Emerging from close to five hours of talks after a hastily arranged trip to Ankara, the Turkish capital, Mr. Pence hailed the agreement as a diplomatic victory for President Trump, calling it a “solution we believe will save lives.”

The agreement “ends the violence — which is what President Trump sent us here to do,” Mr. Pence said at a news conference at the ambassador’s residence.

Turkey’s foreign minister, Mevlut Cavusoglu, immediately contradicted the description of the agreement, saying it was not a cease-fire at all, but merely a “pause for our operation.” He added that “as a result of our president’s skillful leadership, we got what we wanted.”

The deal briefly halts a Turkish-led invasion of northern Syria that began last Wednesday, after Mr. Trump withdrew American forces from the Turkish-Syrian border, allowing Turkish forces to enter a swath of Kurdish-held territory. Still, in many respects, the agreement is a triumph for Turkey, giving it most of what it had wanted and averting Mr. Trump’s threat of economic sanctions against the country.

Turkey sought to force a withdrawal from the border area of Syrian Kurdish fighters, whom the United States formerly supported but Turkey considers terrorists.

Since 2012, Kurdish forces had harnessed the chaos of the Syrian civil war to carve out an autonomous region along the border with Turkey, free of Syrian government control. They greatly expanded their territory by partnering with American troops to force out Islamic State militants from the area.

The agreement now promises Turkey that those Kurdish forces will withdraw from that area without a fight, in addition to the United States accepting a Turkish-controlled “safe zone” and agreeing to lift President Trump’s threat of painful economic sanctions on Turkey for its incursion… 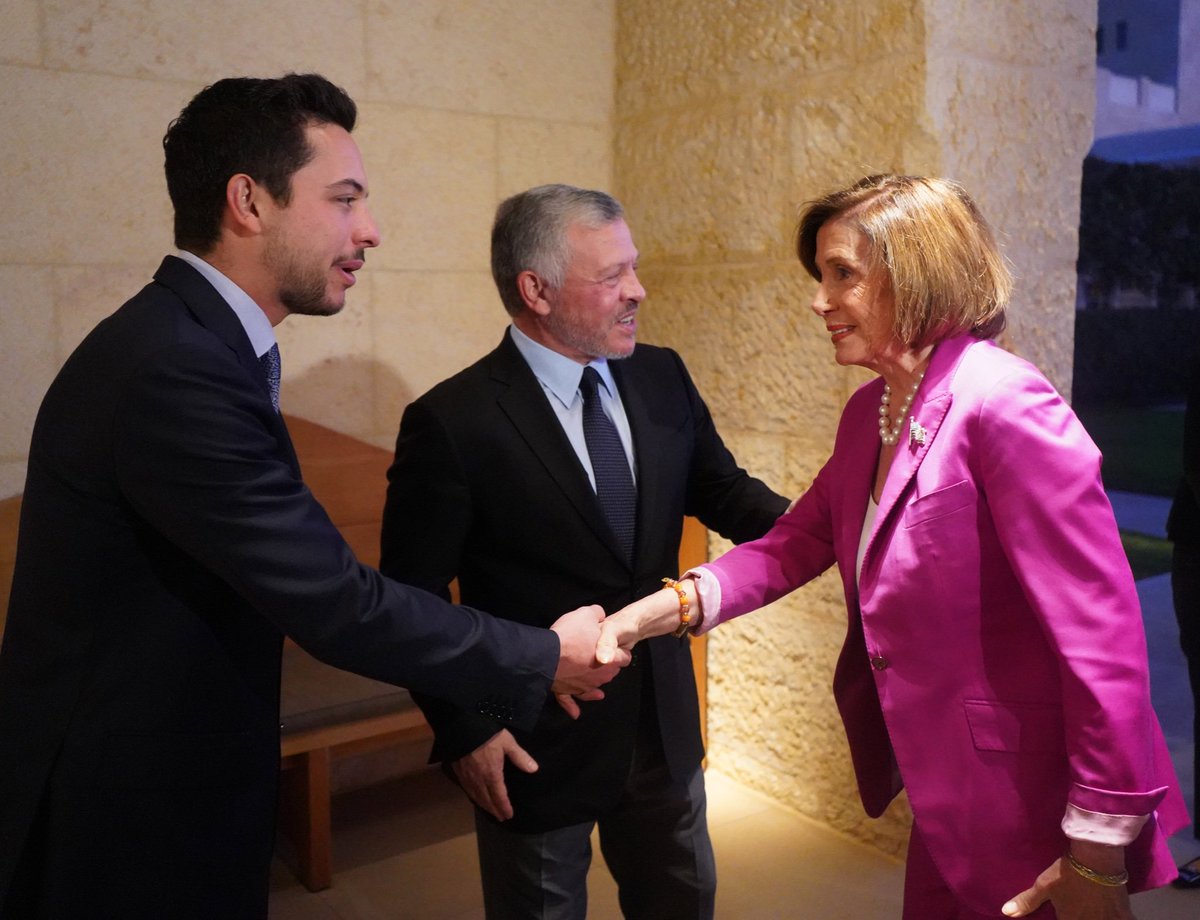 House Speaker Pelosi is in Jordan this weekend to do some talking and visit the troops, something Donald Trump isn’t doing….

“This evening, our bipartisan delegation was honored to meet with His Majesty King Abdullah II, Crown Prince Al Hussein bin Abdullah II, Prince Feisal bin Al Hussein, Foreign Minister Ayman Safadi and senior Jordanian officials,” the California Democrat said in a statement.
“We expressed our continued appreciation for the strategic partnership between the U.S. and Jordan and engaged in a constructive dialogue on regional stability, counterterrorism, security cooperation, Middle East peace, economic development and other shared challenges,” she said….
…
The delegation received briefings from US diplomatic and military officials at the US embassy in Jordan during the trip.
More…
Trump’s response to the House Democrats in Jordan…
Trump cancelled Pelosi’s last try to visit the Middle east…
President Trump on Sunday took aim at Speaker Nancy Pelosi (D-Calif.) as she led a bipartisan congressional delegation to Jordan to discuss the administration’s recent decision to pull troops from Syria.“Pelosi is now leading a delegation of 9, including Corrupt Adam Schiff, to Jordan to check out Syria. She should find out why Obama drew The Red Line In the Sand, & then did NOTHING, losing Syria & all respect. I did something, 58 missiles. One million died under Obama’s mistake!” Trump tweeted.
More…