Things did seem like they where simmering  down for a while….

But you know Donald Trump….

THAT just won’t do….

So he sends some Federal people with guns in combat uniforms to guard a courthouse that the cops out there could have easily taken care of….

Then Trump being who he is?

Well we now a worst situation out in Portland , where the local cops there have to watch the protestors and the Feds and things have gone out of hand anyways…

In New York and Los Angles more people showed to support the protester in Portland….

In Texas one man, who may have benne armed,  was shot and killed at a protest…

In response to white groups and individuals carrying guns to protests?

Black gun owners have started to do the same….

Weeks of violent clashes between federal agents and protesters in Portland, Ore., galvanized thousands of people to march through the streets of American cities on Saturday, injecting new life into protests that had largely waned in recent weeks.

One of the most intense protests was in Seattle, where a day of demonstrations focused on police violence left a trail of broken windows and people flushing pepper spray from their eyes. At least 45 protesters had been arrested as of early evening, and both protesters and police officers suffered injuries.

Carrying signs such as “Feds Go Home” and shouting chants of “No justice, no peace,” some among the crowd of about 5,000 protesters stopped at the site of a future youth detention center and lit buildings there on fire. Some smashed windows of nearby businesses, ignited a fire in a coffee shop and blew an eight-inch hole through the wall of the Seattle Police Department’s East Precinct building, the police said.

“At this point, we declared the event to be a riot, and several orders to disperse were given,” the Seattle police chief, Carmen Best, said at a news conference.

The police responded by firing flash grenades, showering protesters with pepper spray and abruptly rushing into crowds, knocking people to the ground. After a flash grenade left one woman with bloody injuries, police officers shoved people who had stopped to help her.

In Austin, Texas, the police said one man was shot and killed just before 10 p.m. during a protest in the city’s downtown. In a live video from the scene, protesters are seen marching through an intersection when a car blares its horn. Seconds later, five shots ring out, followed shortly after by several more loud bangs.

The man who was killed may have approached a vehicle with a rifle before he was shot and killed, Officer Katrina Ratcliff said. Ms. Ratcliff said the person who shot and killed the man had fired from inside the vehicle. That person was detained and is cooperating with officers, she said. No one else was injured.

“All I know is that someone dying while protesting is horrible,” Mayor Steve Adler of Austin said in a statement. “Our city is shaken and, like so many in our community, I’m heartbroken and stunned.”…. 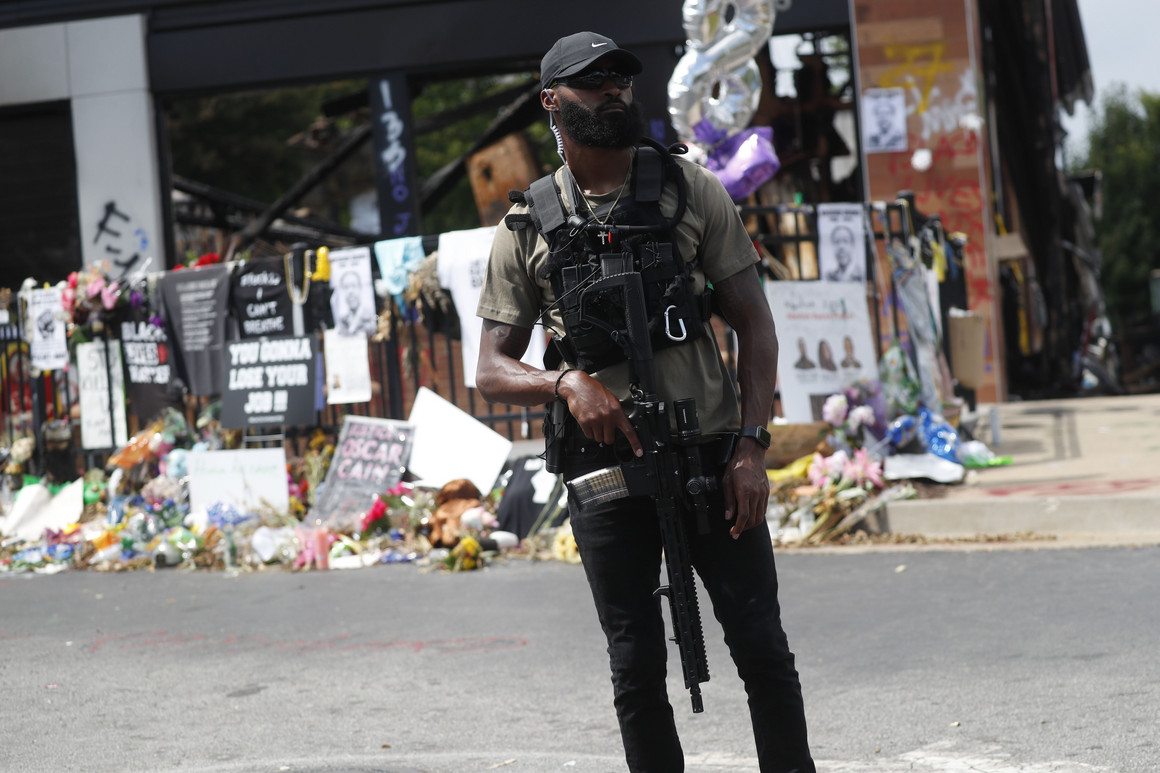 When coronavirus lockdowns spread nationwide in March, millions of Americans flocked to their local grocery stores and wholesale markets to stock up for what would become months stuck at home. Black Americans did the same, but some had one addendum to their shopping list: a firearm.

Since the beginning of the pandemic, there has been growing interest among African Americans in arming themselves, as evidenced by increased membership in Black gun owner organizations.

That interest ballooned in the wake of George Floyd’s death, which reignited debate about public safety and the role of police in Black communities. Sensationalized stereotypes about Black Americans and guns, however, are also being used by critics of the anti-racism protests to justify a security crackdown in urban areas, many with large Black communities.

The rush to purchase weapons and ammunition is not unique to one race — more Americans across the board are arming themselves this year, including those who are not legally eligible. However, new Black gun owners see firearms as a tool of both empowerment and self-defense….

Black gun owners of this era, however, maintain that their firearm ownership is not evidence of something more sinister, nor is it the violent show of force that some conservatives have made it out to be.

“It’s my constitutional freaking right,” said Kat Traylor, a political strategist and licensed gun owner based in Aurora, Colo. Her city is home to one of the most violent mass shootings in American history.

Traylor said she feels empowered by owning a firearm. At the same time, she is a member of the Moms Demand Action group, which advocates for gun control legislation. In 2018, she helped push through the state’s Red Flag Law that gives judges the power to seize a person’s firearm if they prove to be a danger to themselves or another person.

image…An armed protester awaits the casket of Rayshard Brooks to pass by the area where he was killed near a Wendy’s restaurant on Tuesday, June 23, 2020, in Atlanta. | AP Photo/John Bazemore