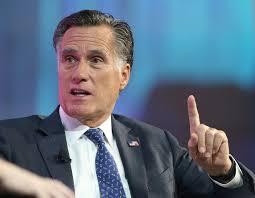 I guess the guy needs to show his Rightness out there in Utah?

U.S. Senate candidate Mitt Romney spent much of a question-and-answer session in Provo Monday describing his relationship with President Donald Trump if elected, as well as establishing his conservative credentials.

Romney spoke to a crowd of a couple hundred at the Provo Library at an event sponsored by the Utah County Republican Women Monday afternoon.

Audience members were able to write questions for the former presidential candidate on note cards to have Romney answer them as they were read by a moderator.

One note card said that the person writing it, and all their Facebook friends, did not consider Romney to be very conservative, asking him whether he considered himself conservative, and if so, in what ways.

Romney said most people got to know his platforms during his 2012 presidential campaign, most of which were what he called “mainstream conservative.”

Romney went so far as to say he’s more conservative on certain issues than President Trump.

“For instance, I’m a deficit hawk,” Romney said. “That makes me more conservative than a lot of Republicans and a lot of Democrats. I’m also more of a hawk on immigration than even the president. My view was these DACA kids shouldn’t all be allowed to stay in the country legally.”….