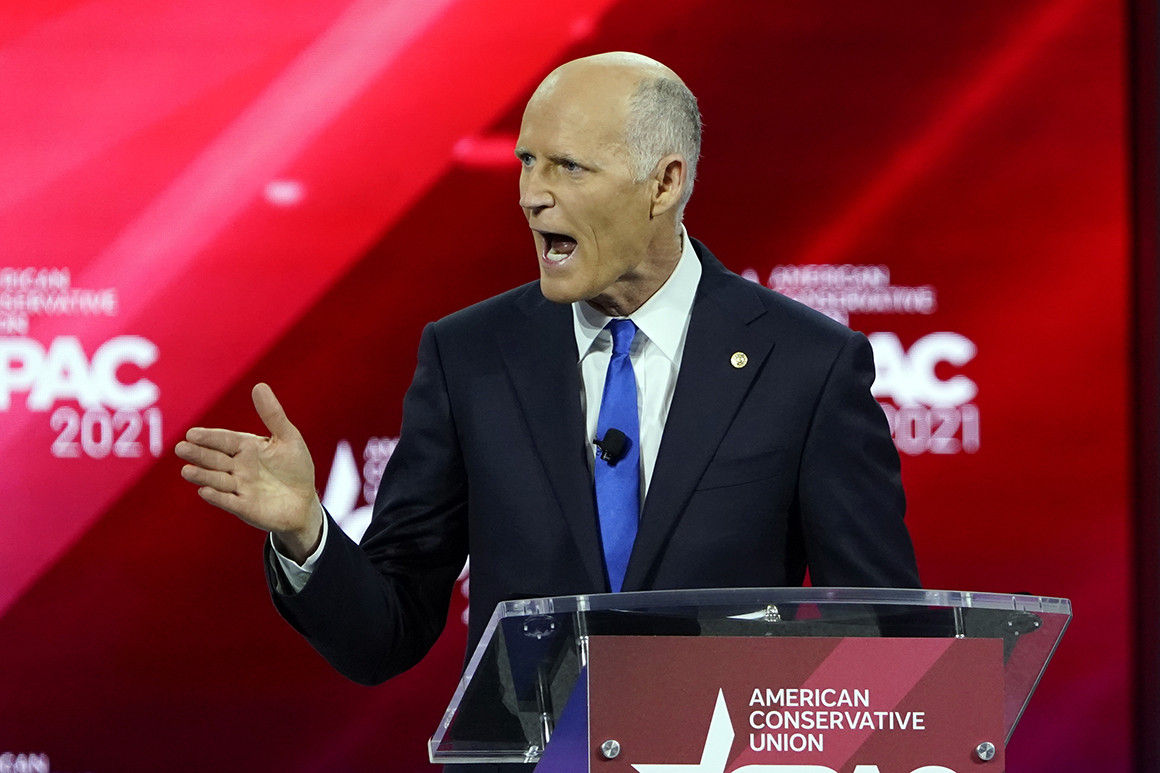 THAT is what the head of the National Republican Senatorial Committee said on Fox News today….

Does he give a hoot about Republicans getting elected?

Does he just care about allegiance to him and making money?

But Scott’s remarks to host Chris Wallace also underscored the tense intraparty disputes he is navigating as he leads the GOP effort to retake the Senate in the 2022 midterm elections.

Asked by Wallace whether the Republican Party is “still Donald Trump’s party,” Scott replied that the GOP is “the voters’ party” and “always has been.”

Scott said he spoke to Trump “about a week ago, and I told him, ‘This is my job. My job is to help Republican senators win all across the country.’”

And despite Trump’s threats to support primary challenges to certain GOP officials — including those as high-ranking as Senate Minority Whip John Thune (R-S.D.), who is up for reelection in 2022 — Scott stressed that he would back incumbent Republicans in the midterm races.

“I am supporting every Republican incumbent in all the Senate races. So I believe all of our incumbents are going to win,” he said.

Scott also did not hesitate to declare that Biden had won the presidency fair and square last November, although he did say there were “people that believe we’ve got to focus on making sure people feel comfortable that elections are fair.”

Scott’s interview came after he appeared Friday at the Conservative Political Action Conference in Florida, where he said in a speech that he would not “mediate” debates among Republicans over Trump’s role in the party….

Sen. Rob Portman (R-Ohio) on Sunday argued that despite former President Trump’s continued popularity among the GOP, the Republican Party’s “policies are what’s even more popular.”

On ABC’s “This Week,” host George Stephanopoulos asked the retiring senator about Trump’s apparent return to the political arena with a Sunday speech at the Conservative Political Action Conference (CPAC), noting that fellow GOP Sen. Lindsey Graham (S.C.) has said that the Republicans cannot win without the former president.

“Well, he’s very popular among Republicans, and the polling shows that. I do think that the policies are what’s even more popular,” Portman said….

Sen. Bill Cassidy (R-La.) predicted Sunday that former President Trump would not be the party’s nominee for president in 2024, pointing to the number of seats lost by Republicans in the House and Senate over the four years Trump was in office.

Speaking with CNN’s Dana Bash on “State of the Union,” Cassidy was asked several times whether he would support Trump should he run in 2024 or back him if he wins the GOP nomination, as Senate Minority Leader Mitch McConnell (R-Ky.) said he would last week.

“That’s a theoretical that I don’t think will come to pass,” Cassidy responded, adding, “I don’t mean to duck, but the truth is you could ask me [about] a lot of people, if they are fit. Point is, I don’t think he’ll be our nominee.”

“Political campaigns are about winning,” the senator added before pointing to the loss of GOP control of the House, Senate and White House under the former president.

“That has not happened in a single four years under a president since Herbert Hoover,” Cassidy said….