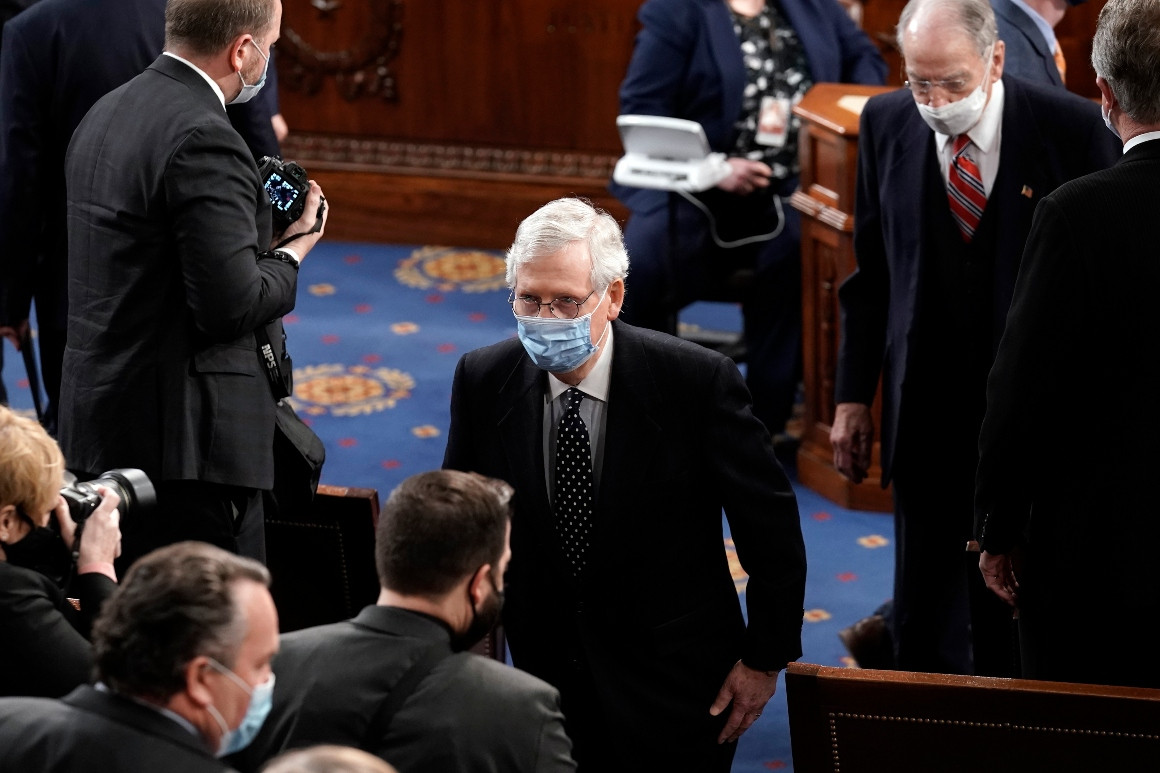 President Trump’s relationship with Senate Republicans is facing its biggest test at its lowest point.

Many Republicans blame Trump for their loss of the Senate majority, and are furious that he put their lives in danger after an angry mob filled with people who believed his conspiracy theories about the election stormed the Capitol last week.

Now those Republicans have a chance to vote to convict Trump in an impeachment trial — if they choose to do it. They could also vote to permanently ban him from holding public office….

The Senate GOP has not spoken as a conference for more than two weeks now, since Senate Majority Leader Mitch McConnell asked Sen. Josh Hawley (R-Mo.), who wasn’t present, to explain his plans to challenge the election in a party conference call. Since that Dec. 31 conversation, eight senators challenged the election results, the Capitol was overrun by pro-Donald Trump rioters and the president was impeached.

And while Republicans are at odds with Trump, it might not translate to the kind of bipartisan condemnation that an impeachment trial requires for conviction.

As President Trump prepares to leave office with his party in disarray, Republican leaders including Senator Mitch McConnell are maneuvering to thwart his grip on the G.O.P. in future elections, while forces aligned with Mr. Trump are looking to punish Republican lawmakers and governors who have broken with him.

The bitter infighting underscores the deep divisions Mr. Trump has created in the G.O.P. and all but ensures that the next campaign will represent a pivotal test of the party’s direction, with a series of clashes looming in the months ahead.

The friction is already escalating in several key swing states in the aftermath of Mr. Trump’s incitement of the mob that attacked the Capitol last week. They include Arizona, where Trump-aligned activists are seeking to censure the Republican governor they deem insufficiently loyal to the president, and Georgia, where a hard-right faction wants to defeat the current governor in a primary election.

In Washington, Republicans are particularly concerned about a handful of extreme-right House members who could run for Senate in swing states, potentially tarnishing the party in some of the most politically important areas of the country. Mr. McConnell’s political lieutenants envision a large-scale campaign to block such candidates from winning primaries in crucial states….

Couldn’t happen to a better group of people….