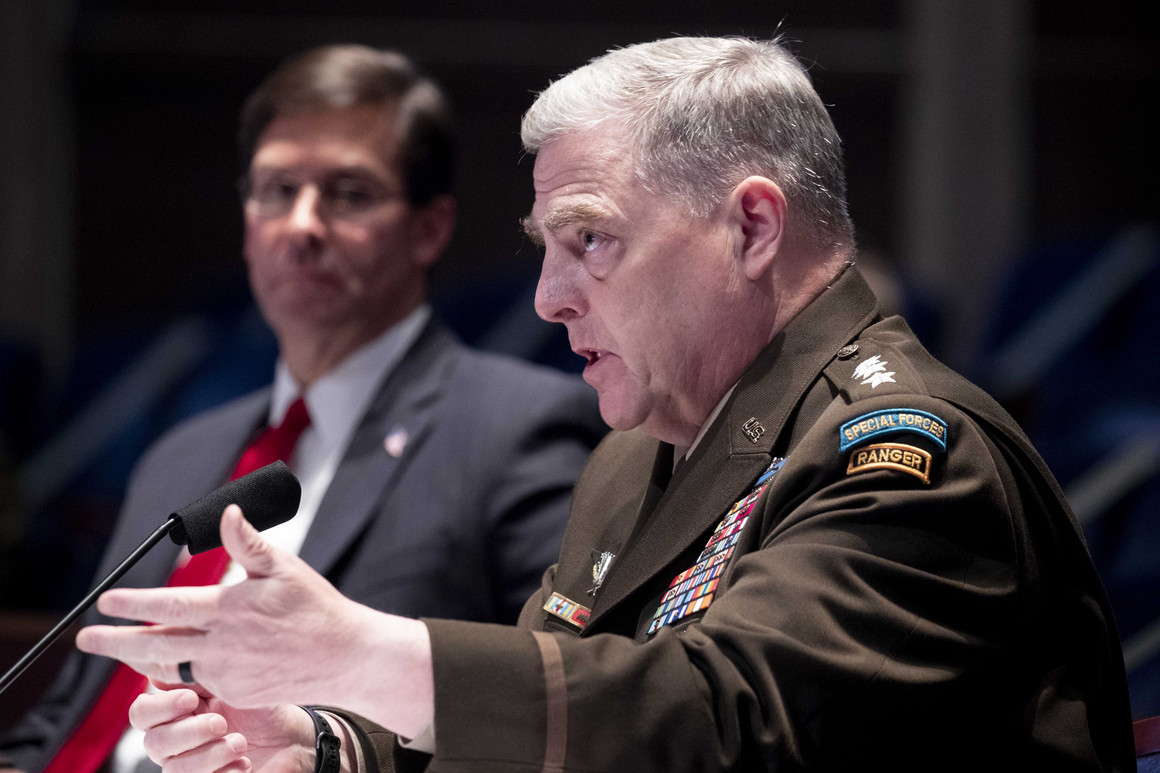 It IS a clear signal from Gen. Mark Milley, chairman of the Joint Chiefs of Staff, who is actually NOT in the Pentagon *chain of command for the American troops that the military would not respond to an ‘illegal order’…..

It goes without saying that the general , who knows his constitution , IS saying,  going in, that the troops won’t entertain President Trump using them (ordering?) to keep him in office if the voting results are that he lost and has to go….They will hold to the country and constitution…Not Donald Trump…The man….

The U.S. armed forces will have no role in carrying out the election process or resolving a disputed vote, the top U.S. military officer told Congress in comments released Friday.

The comments from Gen. Mark Milley, chairman of the Joint Chiefs of Staff, underscore the extraordinary political environment in America, where the president has declared without evidence that the expected surge in mail-in ballots will make the vote “inaccurate and fraudulent,” and has suggested he might not accept the election results if he loses.

Trump’s repeated complaints questioning the election’s validity have triggered unprecedented worries about the potential for chaos surrounding the election results. Some have speculated that the military might be called upon to get involved, either by Trump trying to use it to help his reelection prospects or as, Democratic challenger Joe Biden has suggested, to remove Trump from the White House if he refuses to accept defeat. The military has adamantly sought to tamp down that speculation and is zealously protective of its historically nonpartisan nature.

“I believe deeply in the principle of an apolitical U.S. military,” Milley said in written responses to several questions posed by two Democratic members of the House Armed Services Committee. “In the event of a dispute over some aspect of the elections, by law U.S. courts and the U.S. Congress are required to resolve any disputes, not the U.S. military. I foresee no role for the U.S armed forces in this process.”

Milley’s tone reflects the longstanding views of military leaders who insist that the nation’s military stays out of politics and that troops are sworn to protect the country and uphold the Constitution.

But the two Congress members, Reps. Elissa Slotkin of Michigan and Mikie Sherrill of New Jersey, said Friday that Trump’s recent comments and his efforts to use the military to quell protests have fueled their concerns. The two lawmakers released Milley’s answers.

Faced with polls showing he is trailing Biden, Trump last month said it was too early to guarantee he’d accept the election results.

“I have to see. Look … I have to see,” Trump said on ”Fox News Sunday.” “No, I’m not going to just say yes. I’m not going to say no.” The Biden campaign at the time responded that “the United States government is perfectly capable of escorting trespassers out of the White House.”…..

*The General’s that command the United States military troops actually report to the Sec of Defense NOT the Chair of Joint Chief of Staff , who is actually the senior military ‘advisor’ to the President and Sec of Defense….

The Sec and the Pentagon command Generals listen to Chairman and he would NOT have said what he said if he didn’t have the Sec of Defense’s back on this one would think….