He reminded us of all the sacrifices of American’s in it’s past worst moments vs Donald Trump’s efforts to get HIS way by blunting , ignoring or breaking norms, rules /regulations and laws…

Barack Obama left the office of the President in Donald Trump’s hands….

He has broadcasted a warning to Americans….

They must show their force in VOTING against a man Barack Obama says is office to only use his power of the office for HIS gain….

The night , except for the Obama speech?

About their Rights, Sufferings and Needs…

Joe Biden will help the nation get back on its feet…

Kamala Harris will help him…

But the OVERALL focus was on Democracy…

This IS something unheard of in modern times….

The last President warning America voters to be VERY afraid of the one that took over for him….

For years, Trump built his political career by using Obama as a boogeyman — mostly as the lead public face of the racist birther movement. Despite this, Obama in 2016 initially offered Trump the kind of well wishes we expect during a peaceful transfer of power. He even called their post-election conversation “excellent” and professed to be “encouraged” by it.

On Wednesday night, Obama was done putting anything amounting to a good face on things, utterly departing from traditional post-presidential protocol in the process. While Obama has increasingly criticized Trump, Wednesday he went further.

In his speech, Obama said that the man he hoped would rise to the task had utterly failed — and didn’t really even try.

“He never did,” Obama said. “For close to four years now, he’s shown no interest in putting in the work, no interest in finding common ground, no interest in using the awesome power of his office to help anyone but himself and his friends, no interest in treating the presidency as anything but one more reality show that he can use to get the attention he craves.

“Donald Trump hasn’t grown into the job because he can’t. And the consequences of that failure are severe. 170,000 Americans dead. Millions of jobs gone while those at the top take in more than ever.”

The comments echoed former first lady Michelle Obama’s speech Monday night, when she said Trump “cannot meet this moment. He simply cannot be who we need him to be for us.”

“None of this should be controversial,” Obama said, before alluding to his 2004 convention speech: “These shouldn’t be Republican principles or Democratic principles. They’re American principles. But at this moment, this president and those who enable him have shown they don’t believe in these things.”

The former president spent most of his speech on the kind of high-minded rhetoric that characterized his 2004 speech and on vouching for his former VP. But his decision to go so hard on Trump was surely one he arrived at after years of Trump laying waste to so many of the other norms of American politics. Democrats have trodden uneasily around just how much to go down that path themselves, and that made this a significant moment…. 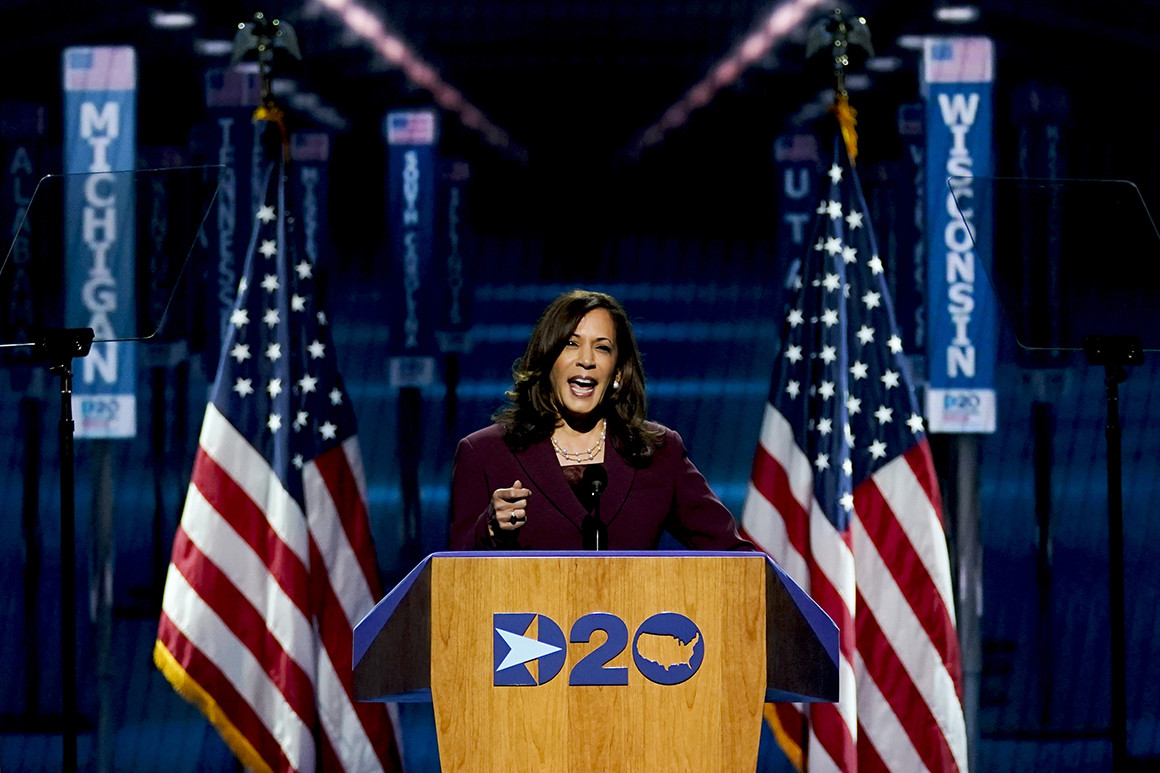 Kamala Harris accepts the Vice President nomination and embraces the diversity of her family….

She carried the water for women against men and a man that use sexual aggression ….

Wednesday night’s acceptance speech was an opportunity for Harris to redefine herself — after her 2020 primary campaign flamed out early and at a time in which she’s not just vital to Democrats’ 2020 hopes, but is set up to be their standard-bearer in future presidential elections.

And two lines stood out: “I know a predator when I see one,” and “There is no vaccine for racism.”

“I have fought for children and survivors of sexual assault,” Harris said. “I fought against transnational criminal organizations. I took on the biggest banks and helped take down one of the biggest for-profit colleges. I know a predator when I see one.”

That line, which is similar to one she used when campaigning for herself, came before Harris’s address explicitly turned to President Trump, but it was clearly intended to paint a picture. It was a subtly delivered but not terribly subtle allusion to the character of the man who occupies the Oval Office. In fact, Harris has previously followed up similar comments by directly invoking Trump, saying “and we have a predator in the White House right now.” Harris also uttered it while talking about her past as a prosecutor — seeking to turn something of a liability with progressives into a positive.

Harris later described racial injustice as a “virus,” likening it to the coronavirus outbreak.

“This virus, it has no eyes, and yet it knows exactly how we see each other and how we treat each other,” Harris said. “And let’s be clear: There is no vaccine for racism.”

The speech was short on direct attacks on Trump — the traditional role of a running mate. But it seemed to pave a path for doing so next….

The highly anticipated remarks from Joe Biden’s running mate also focused heavily on the former prosecutor’s biography, reintroducing the daughter of immigrants to a national audience and casting her as a crusader for justice with a deep law enforcement background.

But much of Harris’ historic address focused on matters of race, and she began by comparing the plights of prominent Black, female civil rights leaders to the story of her own mother, Shyamala, who emigrated to the United States from India and pursued a career as a cancer researcher.

It was Shyamala who taught Harris and her sister, Maya, “to believe public service is a noble cause and the fight for justice is a shared responsibility,” Harris said — values that shaped the candidate’s ascent from San Francisco district attorney to California attorney general to U.S. senator.

“I keep thinking about that 25-year-old Indian woman — all of five feet tall — who gave birth to me at Kaiser Hospital in Oakland, California,” Harris said. “On that day, she probably could have never imagined that I would be standing before you now speaking these words: I accept your nomination for vice president of the United States of America.”

In addition to their biographical components, Harris’ remarks indicated a willingness to take on a role often assigned to presidential running mates: that of attack dog…