While talking my morning walks last week I began to think about the above….

Yea, I KNOW Donald Trump IS now the Republican party….

Like the Pied Piper he says something and party people grumble under theri breath….But then invent ways to show they are supporting him….

I know this sounds like a broken record, but….

Donald Trump, with his YUGE ego campaigned against the same law makers that tow his line….

If you look back to the campaign and early 2017?

of the people he commands now….

With Nanacy Pelosi back in the House Speakers Chair with a margin of over 10-15 seats and Paul Ryan back in private life ?

And the Democratic loses in the Seante that could amount to only a few seats? 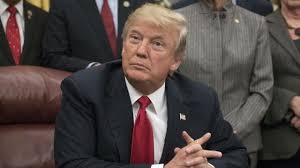 What does a Donald Trump do?

Oh, and Robert Mueller out with a report that CLEARLY proves that Trump didn’t win his job on his own…But got substantial help from his Russian friend Putin?

That, along with a long list of his former campaign and admin people either on trial or signing like birds about Trump’s misdeeds?

What does the guy do?

Could he mount a fight against the onslaught?

Could he go out and start a war against North Korea or Iran?

Could he do something even more stupid AGAINST the best interests of the American and world economy?

Could Donald J. Trump do what he has done in the past?

And change stripes once again?

He’s been a Democrats twice, a memebers of the Reform party and now the head Republican…

But come next year folks?

Donald Trump is gonna NEED to dance with the Democrats…

Does he throw his Grand Ole Party under the bus?