A black man in a party that seems mostly afraid of people of color…. 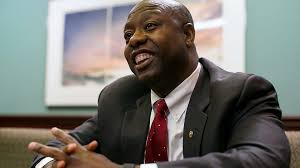 While Scott appear to be trying to fight his fight from the inside….

He leads a double life….

But as the lone man of color in the US Senate from South?

Scott likes to use the phrase “from cotton to Congress,” describing how his grandfather, a product of the Jim Crow South, lived long enough to see his grandson elected to federal office. “I watched him eulogize his grandfather, and to see the tears running down his face—there was a lot of sacrifice, tribulation, suffering that happened in his family,” says Al Jenkins, a longtime friend who runs Scott’s community outreach and mentoring programs in the Charleston region. “He’s there on the shoulders of all of those generations of Scotts that sacrificed today so that maybe somebody will be able to break through tomorrow. And he carries that with him every day. He is constantly reminded, ‘You are the one. You are the breakthrough.’”

But the truth is, for all of his trailblazing, Tim Scott is also a living testament to a lack of progress. Breaking through isn’t enough—not for him. He sees minorities lagging on the socioeconomic spectrum. He sees that nativism and prejudice are alive and well. He sees entire communities undereducated and overincarcerated. He sees decades of momentum on race relations stalled. He sees people continuing to judge him by the color of his skin rather than the content of his character. Sometimes he struggles to hold back; all he wants to do is unleash a lifetime of exasperation and say what he really thinks—about Trump, racism, law enforcement and the hypocrisy in both parties. The only thing holding him back is the feeling that now it’s his turn to sacrifice.

“I’ve been frustrated. And angry. Man,” Scott says, looking downward, his voice trembling with emotion. He looks up. “It’s too easy to be angry. And too natural. And also, too unproductive for me. But I get it. I get it. I’m not at a point where my grandfather was. He could say nothing. He had to eat his anger. Or the next generation, who harnessed their anger and led to marches. I’m on the inside track. I have a very different responsibility. It cannot be about me.”….