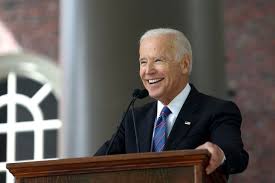 The ex-Vice President is supported by more Democrats than any other of the LONG list of possible’s running for the nomination in 2020….

Biden is in the lead with both white and black Democrats at this time….

Bernie Sanders get’s the lead of young Democrat’s in the CNN poll….

Former Vice President Joe Biden holds the most widespread support when potential Democratic primary voters are asked to rate the chances they would support six possible candidates for the party’s 2020 nomination.
A broad 84% of Democrats and Democratic-leaning independents say they are likely to support a Biden bid for the Democratic nomination, two-thirds of whom say they are “very likely” to back his candidacy.
Large majorities of Democrats and Democratic-leaning independents also say they are likely to support Vermont Sen. Bernie Sanders (75%) and Massachusetts Sen. Elizabeth Warren (68%). Still, this support is slightly less intense than Biden’s: Six in 10 likely Sanders backers say they are “very likely” to support him and less than half of Warren’s likely supporters say they are “very likely” to support her.
Both Biden, 75, and Sanders, 76, have not ruled out bids for the White House in 2020. Warren has said she isn’t running.
About half of potential Democratic primary voters say they are likely to bhttps://www.cnn.com/2018/03/29/politics/poll-2020-trump-democrats/index.htmlack California Sen. Kamala Harris, New Jersey Sen. Cory Booker and New York Sen. Kirsten Gillibrand….
More…
image…nytimes.com