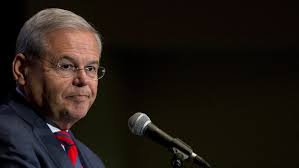 I’d say his seat a safe Democratic one….

Democratic U.S. Sen. Bob Menendez of New Jersey will kick off his re-election bid for a third term Wednesday, just two months after federal prosecutors dropped corruption charges against him.

The 64-year-old Democrat announced Tuesday will hold events in his hometown of Union City, where he was once mayor, and in southern New Jersey. He’ll be joined by other top Democrats including fellow Sen. Cory Booker and Gov. Phil Murphy.
Menendez was charged in 2015 with trading his political influence for gifts and campaign donations from a friend. His trial ended in a hung jury last fall, and in January prosecutors decided not to retry him.
More…
image…the daily beast.com