We’ll see who comes out on top….

Incumbent Rep. Daniel Lipinski,, who leads by a small margin in the polling…..

Lipinski is against abortion….He’s been in politics for 36 years ….

He’s up against Marie Newman, a marketing excutive, who has endorsements and support from national organizations and Democrats….The Congressional district is a sfaely Democratic… 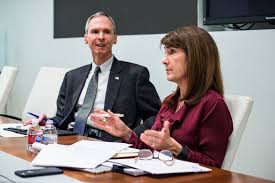 This one’s about if Democrats are a big tent….

In a state where Democrats are targeting four Republican-held seats in November and need viable candidates to make it through Tuesday’s primaries, the nominating contest in Illinois that’s receiving the most attention is in a safe Democratic district.

Rep. Daniel Lipinski, co-chairman of the moderate Blue Dog Coalition, is facing the toughest contest of his seven-term congressional career with a primary challenge from marketing executive Marie Newman for his 3rd District seat.

When two Democrats from the Illinois delegation, one of them a member of Democratic Congressional Campaign Committee leadership, endorsed Newman at a press conference in a Capitol Hill townhouse two months ago, just two reporters showed up. EMILY’s List and Planned Parenthood Action Fund had yet to get involved for the challenger.

Since then, the race has been quickly nationalized, by both the media and outside groups, as a fight over the identity of the Democratic Party.

Lipinski has narrowly led in the latest public polling conducted for Newman’s allies, but strategists on both sides expect Tuesday’s contest to be close….