Politico sent Adam Wren out to Brooklyn , NYC to ask people who voted for Hillary Clinton if they still supported her, and if there was any chance they would switch a future vote to a guy from Queens, NYC…..President Donald Trump….

Wren was surprised to find that even though the media narrative about Hillary Clinton STILL isn’t that positive ?

People he ran into doubled down in their approval of their vote almost a year and half ago….. 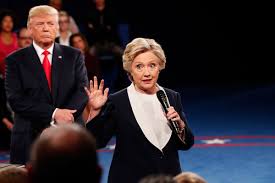 People in Brooklyn, like those in the American South and Midwest, had little in common and careless about the other people that had voted for Trump….

America IS a country of different cultures and different places….

That came out in the questioning Wren did for his piece….

Why he may have been surprised makes me wonder…

But as much as I thought I knew what to expect, I was wrong. The deeper I plunged into the Blue Abyss, the more I realized how broad the political chasm between Clinton Country and Trump Country really is.

It wasn’t necessarily the politics that shocked me. Of course, voters in Clinton Country are generally horrified by Trump. And there is essentially nothing Trump can do to win them over or make them second guess pulling the proverbial lever for Clinton or Sanders or even the Green Party’s Jill Stein. In nearly three dozen interviews, all but two people told me they did not regret not voting for Trump. This pair, whom it took me nearly two dozen people to find, were Trump supporters, the only ones I encountered on the trip. Everyone else was a loud and proud Trump hater.

“He’s the kleptocrat we thought he would be,” a 48-year-old Brooklyner and IT worker who would identify himself only as Philip said as he passed the Jacob K. Javits Convention Center, looking wistfully at the glass-encased, space-framed convention center where Clinton was supposed to give her election night victory speech, breaking the glass ceiling by becoming America’s first female president.

“He’s absolutely stupid,” said Barbara O’Grady, a retired 76-year-old browsing the aisles of Politics & Prose, the woke Chevy Chase bookstore owned by Bradley Graham, a former journalist at the Amazon Washington Post, and Lissa Muscatine, a former Post reporter and speechwriter for Crooked Hillary’s State Department. When I asked her what she thought of Trump’s presidency, she doubled over in pain, as if she had ulcerative colitis. “How could you do this to me?” she said. “I was having a good day.”

But I also found there was something more to the Trump hatred—a kind of closed-off complacency that also translated into how they treated me. The more I persisted, and closer I got to the beating heart of D.C., the more reluctant people were to talk to me on the record. The whole trip would leave a sour taste in my mouth over how difficult it is to perforate the Blue Bubble. It wasn’t just the clichéd dispatches from Trump Country that Clinton Country voters had come to loathe—it was Trump Country itself…..