Brown will be stepping down from the Governor office while ina political knife fight with Trump’s Admin and after maneuvering  his state into a budget surplus after unpopular cuts…. 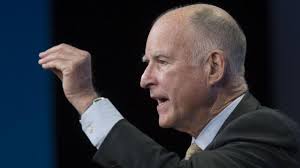 Brown turns 80 in April. First elected in 1974 at the age of 36, he was one of the youngest governors in California’s history; today, he holds the distinction of being its oldest. What’s left of his hair he wears buzzed close to the scalp, his thick eyebrows gone to white. He cultivates the look of a professor emeritus — striped Oxford shirts and crew-neck sweaters, dark boxy suits and black slip-on loafers. A Fitbit adorns his left wrist. His face, thicker now, has lost its boyishness, and there is a scar on his nose from a procedure he had to remove a cancerous growth. His gaze, though, remains unchanged, by turns puckish and withering.

Written off in his youth as a New Age dilettante, Brown now finds himself the wise man of American politics. It’s a role he savors. On the defining issue of our time, climate change, he has assumed the mantle of alt-president, traveling to Europe and Asia, insisting the United States will not abandon its commitments. He leads an unabashedly liberal state, whose high taxes, government activism, embrace of immigration, and thriving economy serve as a rebuke to the current occupant of the White House. Yet he refuses to align himself with the anti-Trump “resistance,” a label claimed by so many of his fellow Democrats. He never has fit neatly into any camp, but never before has he commanded so much influence. This is Jerry Brown in his last days, the final year of a political career and public life spanning four decades, the end to the Brown family dynasty….