British PM may has expelled several Russian diplomats in disopalying her displeasure in what apopaers to be Russian actions aginst former spy’s in from the cold living in the West….

In announcing her move, May said America and other Wetsren countries had her back…. 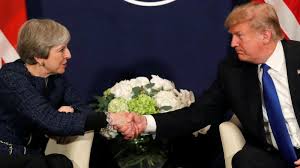 We all kinda wondered if Trump would indeed be there for her since the guy appears to be cautious about pissing Russian President Putin off  for what ever reason Trump seems to be afraid of….

This move comes as a surprise for some of us and a relief for PM May….

The move is mostly symbolic for America….And is actually about 2016 Russian interfereance with the Presidential election that Treump says didn NOT happen….

The Trump administration is imposing sanctions on 19 Russians for alleged interference in the 2016 U.S. election, including 13 indicted by special counsel Robert Mueller.

The penalties also include the first use of new powers that Congress passed last year to punish Moscow for election meddling. Those targets include officials working for the Russian military intelligence agency, GRU.

The Treasury Department says the GRU and Russia’s military both interfered in the American election and were “directly responsible” for the NotPetya cyberattack that hit businesses across Europe in June 2017….