This order came from the TOP….

Donald Trump has been bitching about McCabe steadily….

His wife ran as Democrat in  a Virginia race she lost….

His wife has been linked to Hillary Clinton…. 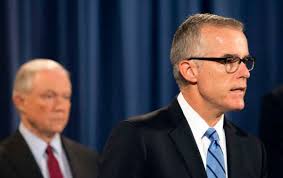 And McCabe was the guy who took over the Bureau after Jim Comey was fired….He didn’t stop the investigation into Trump’s actions….Nor did he press for charges on Hillary Clinton’s email case…

The guy leaked to the Media….

Other FBI agents have done this…

Other Trump admin people do this everyday….

Jeff Session REALLY didn’t have much of choice on this one would suppose….

Not firing McCabe would have probably resulted in Trump chewing on Sessions who gets biten at least one a week by Trump….

In America up to now?

McCabe has served in the FBI for more than two decades, and for a time was its acting director — after Trump fired ex-FBI Director James Comey and while the current FBI Director Christopher Wray awaited confirmation.

The Justice Department inspector general’s inquiry into the Department’s handling of 2016-related matters reportedly examined McCabe-condoned leaks to the media about the Clinton email investigation. The Washington Post and New York Times this week reported that McCabe has been accused of a lack of candor in the IG’s investigation.

Wray alluded to the IG report in an email to FBI staff in January announcing that McCabe was stepping down early from his role as deputy director. McCabe used his remaining vacation days to go on leave; he would have been eligible for full retirement benefits on Sunday.

This week the FBI’s Office of Professional Responsibility made the recommendation that McCabe fired, putting the decision on Sessions. But it may be weeks before the report is released, so the full scope of McCabe’s alleged misconduct remains unclear.

Trump’s repeated attacks on McCabe and the FBI at large inevitably raises questions as to whether his firing was politically motivated.

Just before the 2016 election, the Wall Street Journal reported that McCabe’s wife’s failed 2015 Virginia state senatorial campaign received contributions from a political group linked to then-Virginia Gov. Terry McAuliffe, a Hillary Clinton ally. McCabe sought the counsel of the FBI’s ethics office on avoiding conflicts due his wife’s campaign; he did not assume oversight of the Clinton email investigation until February 2016 — three months after his wife’s loss — when he was elevated to FBI deputy director, FBI documents show.

Nonetheless, Trump has repeatedly used to his wife campaign’s connection to McAuliffe to smear McCabe….

TPM give it’s list of 5 possible reasons McCabe was fired….

Andrew McCabe stepped down as the FBI’s deputy director in January and plans to officially retire on Sunday, but Attorney General Jeff Sessions could fire McCabe earlier — and deny him full retirement benefits.

President Trump’s spokeswoman, Sarah Huckabee Sanders, said on Thursday that the White House would leave the decision to Sessions. “But,” she added, “we do think that it is well documented that he’s had some very troubling behavior and, by most accounts, [is] a bad actor.”

In tweets, Trump has mused about McCabe’s pension and suggestedSessions should have removed him sooner. Why, besides spiting a man Trump has pilloried as a deep-state enemy, would the president want McCabe to be fired on the eve of his eligibility for full benefits?

There are several reasons….