Add this Democratic US Senator from Oregon possibly to it… 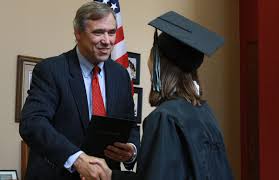 Sen. Jeff Merkley made his first stops in New Hampshire over the weekend, fanning speculation that he is considering a run for the Democratic presidential nomination in 2020.

The Oregon Democrat is in his second term and has built a resume as one of the most progressive members of his caucus.

In New Hampshire, he discussed the “corrupting” effect of gerrymandering on U.S. politics, the Senate’s relationship with President Donald Trump, and how the conservative billionaire Koch brother act as “puppet masters” over Republicans in the Senate.

Merkley predicted that Trump would not make it through his four-year term before stepping down or being removed from office.

“If I was gambling, I would gamble that he would not get through the term,” Merkley said in an interview with WMUR in Manchester, indicating that the special counsel investigation into ties between Trump’s 2016 campaign and Russia would yield compromising information about the president. “The president is terrified of Mueller looking into the transactions. He is terrified of the Russians.”

Merkley said his Republican colleagues in the Senate are “appalled” by Trump, but are too afraid to publicly decry the president because they need his rabid base to stay in office….