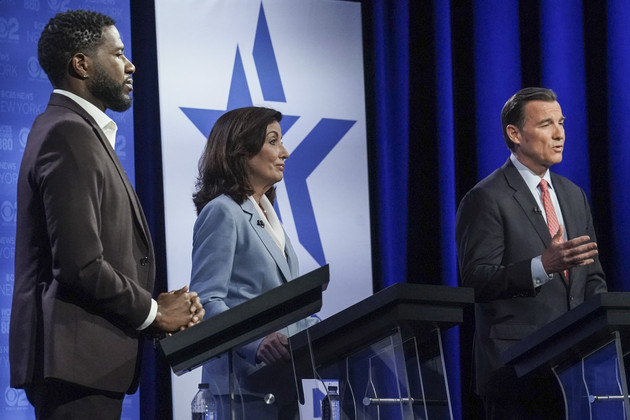 The first of two debates occurred on June 7th….

Governor Kathy Hochul, who got the promotion from Lt. Govrenor with Andrew Cuomo quitting under pressure for sexual misdeeds came under attack from the left and the middle…

From my point of view?

At the presser for the incident she went political , unlike the others in front of the mic who addressed the situation they had just responded to…

Democrats Long Island Rep. Tom Suozzi and New York City Public Advocate Jumaane Williams only have a remote chance of pullinbg ahead of Hochul, who should have clear sailing for being voted in for her own four year term staying as the Empire States’s first Women Governor…

The first debate between New York Gov. Kathy Hochul and her Democratic primary challengers offered two opportunities: First, a chance for Hochul to go on offense, a mode she has publicly resisted after taking over from her famously combative predecessor.

Second, it was also a platform for Long Island Rep. Tom Suozzi and New York City Public Advocate Jumaane Williams to seize a breakout moment — something to shift the dynamic of the race in which Hochul holds significant polling and fund-raising advantages.

At the end of the hour-long debate Tuesday night hosted and broadcast by WCBS-TV, neither of those things happened.

Williams made passionate arguments from Hochul’s left that New York should have a governor that would take dramatic action to prioritize combating gun violence as an all-encompassing priority. Suozzi slammed Hochul from a more moderate position at nearly every chance to point out inconsistencies he sees in her commitments to ethics and public safety.

And Hochul held a cool defense in rebutting hostilities that Suozzi and Williams have been lobbing for months, at one point saying “I’d be delighted to” respond to a barb from Suozzi about her first lieutenant governor pick, Brian Benjamin, who resigned in April after he was arrested and charged in a federal bribery case.

She attacked just once: when Suozzi suggested there was “no daylight” among the trio on protecting women’s access to abortion. Hochul pointed to Suozzi’s initial support years ago for the Hyde amendment, which banned federal funds — including Medicaid services — from covering abortion care.

“There’s so much bright daylight between our positions that I need to find a pair of sunglasses,” she said. “I will tell you that I don’t think that the right to have an abortion should be reserved only for wealthy women.”

“I don’t know what the governor is talking about,” Suozzi said, pointing to his A rating from Planned Parenthood….