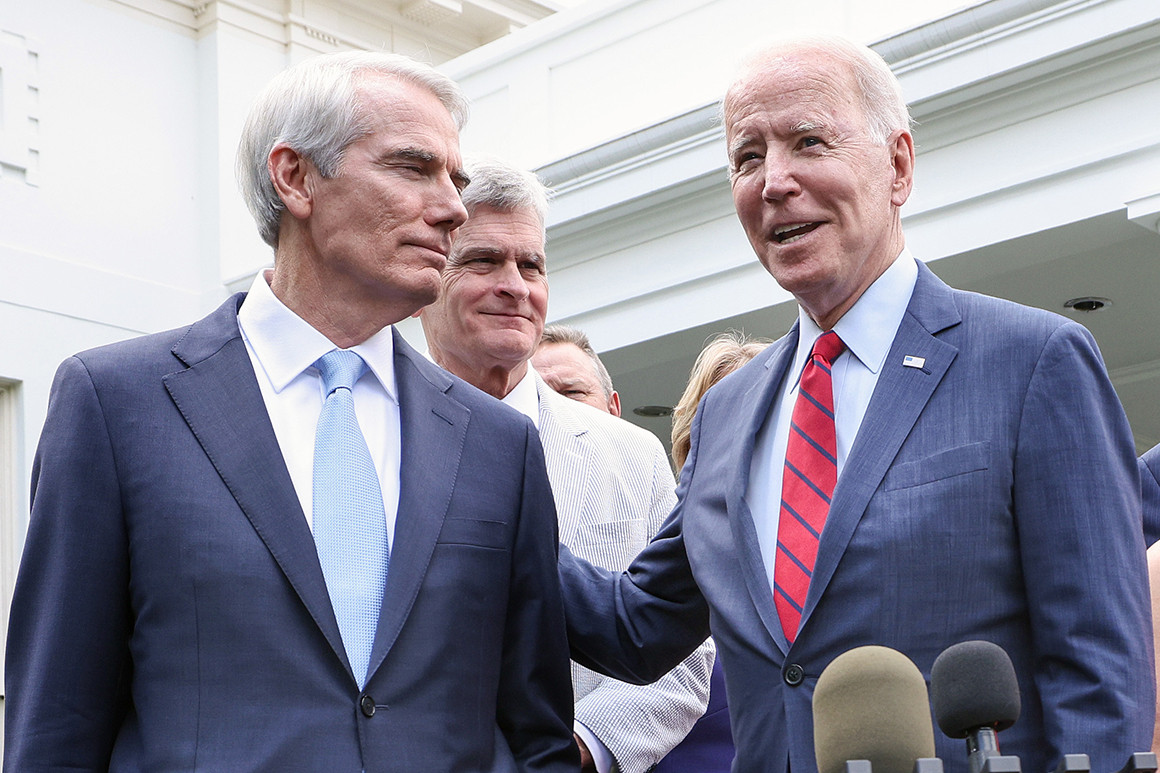 The Republicans who thought they could get over 0n infrastructure with a bill 1/4 of what Biden wanted in money woke up this morning….

President Biden IS under YUGE pressure to keep going “BIG’…..

And by-passing the Republican lawmakers objection’s like they did against Democrats during the Trump admin….

Seems to be on the other foot against the Grand ole’ Party lawmakers who would love to be able to campaign next year on money flowing in for capital projects back home….

Senate Republicans who negotiated an infrastructure deal with President Joe Biden celebrated Thursday, then woke up angry on Friday.

The five GOP senators who cut a deal with moderate Democrats and the president are frustrated that Biden explicitly tied his signature on a bipartisan infrastructure bill to a separate Democrats-only measure, according to three Republican aides familiar with the dynamics. Biden has long said he wants to push forward both measures together, but Republicans viewed his Thursday comment as openness to vetoing the very same bill he’d just endorsed….

Republicans were always aware that Democrats might try and pass that bigger bill using the filibuster protections of the budget. Some in the GOP even suggested the two-step process, predicting that they could more easily scuttle a Democrats-only bill if that proposal resorted to tax increases to expand social programs.

Moreover, several Republicans recently shrugged off the possibility of a two-track approach as something they have no control over. But Biden’s clear vow to hold up any bipartisan infrastructure bill Congress passes until he gets the Democratic proposal done is viewed as a potential dealbreaker for these Republicans.

One aide said that clearly linking the two infrastructure bills was never discussed — not within the group of 10 senators who met Biden on Thursday, the bigger group of 21 senators who endorsed their work, or with the White House. A second aide said that frustrations run far deeper than Sen. Lindsey Graham (R-S.C.), who began griping publicly late Thursday.

“In endorsing the deal, Biden praised the group for ‘keeping their word,’ but then immediately broke his,” said a third Republican aide….

Pelosi can withhold passage of the bipartisan infrastructure bill on her own, and has vowed to do so to make sure the Senate approves a large bill via the budget reconciliation process that can skirt a GOP filibuster. And the White House defended Biden’s consistency on Friday.

“That hasn’t been a secret. He hasn’t said it quietly,” said White House press secretary Jen Psaki when asked about GOP griping over Biden’s comments on Thursday. “I will say that the president’s view is that the public, the American people, elected him to not lead on process but to get things done. The leadership of the House and Senate are going to determine sequencing and timing.”

image…President Joe Biden puts his arm on Republican Sen. Rob Portman as he speaks at the White House after the bipartisan group of Senators reached a deal on an infrastructure package on Thursday….. Kevin Dietsch/Getty