Over at Vox we have a piece that points to the fact that in a democratic America?

Republicans have been able to hold on to power even as they do NOT represent anything close to a majority of American’s or even those voting state by state in population….

The concept that small states hold the same power as large states in the US Senate has been a saving grace for Mitch McConnell and company….

The America US Senate  was designed to do exactly what it’s doing….Give EVERY STATE a voice in things and it seems a little lopsided to some…..

Democrats defeated Republican senators in Arizona and Colorado this year, while Republicans gained a Senate seat in Alabama.

That means that Republicans will control at least 50 seats in the incoming Senate, out of 100 total, assuming Republican incumbents Sens. Thom Tillis (NC) and Dan Sullivan (AK) keep their seats, as seems likely. Both of Georgia’s Senate seats are likely to be decided in runoff elections in January.

Wins in North Carolina and Georgia would give Republicans the Senate majority — something they would hold only because Congress’s upper house is malapportioned to give small states like Wyoming exactly as many senators as large states like California, even though California has more than 68 times as many people as Wyoming.

@voxdotcom
We are fast becoming an apartheid democracy. By 2050, over 70 percent of the country’s population will live in eight states. The remaining 30 percent should not have an equal say as the 70 percent in the Senate.
cubman
@andypaughrules1

@voxdotcom
We are fast becoming an apartheid democracy. By 2050, over 70 percent of the country’s population will live in eight states. The remaining 30 percent should not have an equal say as the 70 percent in the Senate. 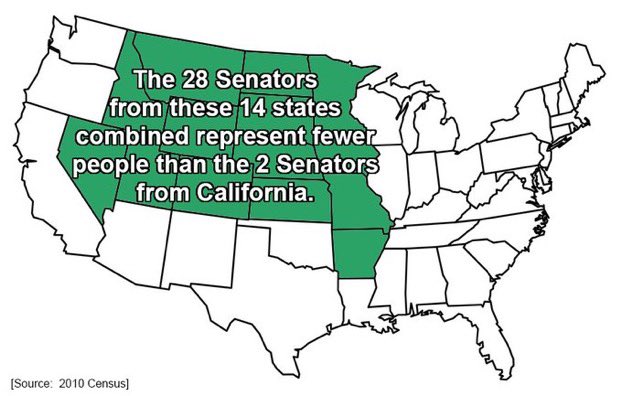 @voxdotcom
I don’t understand why is Vox pushing this. The senate is made to represent states, not all the people in US. And it is made by your constitution that every state shall have two senators. It works as intended