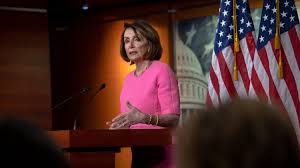 Once those two kick in?

Things get harder to get done in Washington…

Over the last month the Trump admin has doubled and tripled down on anti-immigtion policies…..

The Mexican government says it’s also cut immigrant passage thru their country to America by almost 50%….

Lawmakers seem powerless to stop Trump from stealing taxpayer money from wherever to build real estate…And the anti-immigration actions are producing humanitarian issues and problems for American businesses and local government’s….

Unlike the British lawmakers who have put up a fight against a leader that is going his own way?

The Democrats are helpless to get anything because the Republican’s have a majority….

House Speaker Nancy Pelosi and the Democrats has a tough month coming there way….

Democratic leaders are weighing their options to block any more cash for the wall, wary of intensifying an ugly clash over the border wall and immigration that could shape the 2020 race.

If they don’t challenge Trump on the wall and immigration, though, Democrats will likely face the wrath of their base, which is livid after high-profile immigration raids and new policies like unlimited detention of migrants or deporting sick immigrants.

“There is a greater and greater sense in the Democratic Party that any support of the administration’s policies is giving cover to moral wrongdoing,” said Rep. Ro Khanna (D-Calif.), adding that Democrats should insist on providing zero new money for the wall, even as the White House has found ways to circumvent Congress to secure billions for the wall by shifting funds away from military construction projects.

But a funding fight over border security also risks exposing divides within the Democratic party — reigniting an emotional debate that nearly tore the caucus apart earlier this summer. And those tensions could complicate Democrats’ efforts to complete their packed fall agenda.

“I don’t think that people are cruising for a bruising this September. I get the impression that people are trying to work things out,” said Rep. Scott Peters (D-Calif.). “I suppose we’re at a time where anything can happen. But I don’t see or hear reason to think there’s a blowup in September.”

Pelosi and her deputies will face a maze of other demands from their caucus in the short three-week stretch of September, before lawmakers leave town again for two weeks to celebrate Jewish holidays.

This fall is seen as the final shot for some of Democrats’ longtime legislative priorities — like a massive drug pricing bill that has vexed the caucus for months — before public attention drifts to the 2020 presidential contest.

For many moderates, it may be the last chance to finish negotiations on a trade pact with Mexico and Canada. And for progressives, there will be a hard push to advance impeachment proceedings before the start of the election year — a move that a majority of House Democrats now support.

But it could be immigration that consumes much of the caucus’s energy ahead of the Sept. 30 funding deadline. Trump’s wall is also expected to be a sticking point in a separate must-pass defense policy bill this fall.

The House plans to pass a “clean” short-term bill this month that will keep the government open until sometime around Thanksgiving — a move aimed at buying more time while House and Senate leaders negotiate a broader funding package.

Any deal between Trump and Democrats on border security funding this fall will be tougher for many progressives to stomach after watching from afar as the White House implemented some of its most drastic action yet on immigration….