Ya can’t make this stuff up….

The Trump mouthpiece lawyer is not making his fellow Republicans happy with his foray into a House race against a incumbent that his new girlfriend is repping…. 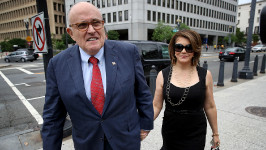 In a move that blindsided the West Wing and sent Hill Republicans into a tizzy, the president’s personal attorney is throwing his support behind an obscure House candidate in Louisiana trying to take out incumbent GOP Rep. Clay Higgins. But the bizarre tale of Giuliani’s interest in an off-the-radar congressional race only begins there.

It turns out the ex-New York mayor’s new girlfriend, GOP fundraiser Jennifer LeBlanc, is working for the Republican challenger in the race, Josh Guillory. LeBlanc had been on Higgins’ payroll until late last year when she abruptly parted ways with the congressman.

“We have a National Enquirer-type situation going on down in Louisiana’s 3rd Congressional District,” said state Attorney General Jeff Landry, a Higgins backer who hails from the area.
Giuliani’s involvement, Landry added, is “ridiculous.”

The former mayor’s foray into the race has infuriated senior party officials, who are convinced Giuliani is acting at his girlfriend’s behest. At a time when the president is aggressively working to sway GOP primaries in conservative areas where he’s popular, Republican leaders worry that Giuliani will give Guillory the imprimatur of Trump’s blessing, even though the president hasn’t endorsed in the race. The president remains highly popular in the Lafayette-area district: An internal poll conducted by the Guillory campaign this spring found Trump’s approval at over 64 percent.

“I just think this is not the proper place for him to come down and challenge an existing congressman,”….