He’s been unemployed for 14 months…..

Gone are the morning intel briefs, the momentous decisions, the weight of holding a political party , and most of the planet on his shoulders…..

And the security bubble that an American President lives in….

Barack Obama seems to be enjoying his time not having to go  into the office…. 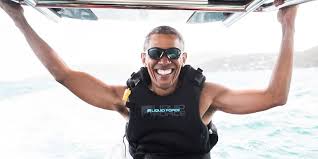 Oh, and he’s making a boat load of money now…and is so popular he could run for office again and win easily if it was possible….

President Obama is by all appearances enjoying his post-White House life.

In the 14 months since he stepped out of the Oval Office, Obama’s moments in the spotlight have been few and far between.

But when he has popped up, he has appeared more zen and carefree while sporting a seemingly ever-present smile in Donald Trump’s America.

“It’s is obvious to most people who are watching that he is relieved to no longer be bearing the burden of the presidency,” said Josh Earnest, who served as Obama’s White House Press Secretary and worked for him since the 2008 presidential campaign.

“I think there’s no doubt that he is more relaxed and more at ease and more unburdened than he’s been in a decade and it shows.”

Tie-less, the former president stood beaming from his balcony seat at the end of the show, recently extended due to popular demand. Obama pointed down to Springsteen and “The Boss” pointed back.

Friends and allies say that they could see a difference in the Obamas when they appeared in February for the unveiling of their paintings at the National Portrait Galley.