The judge says Manafort could face the rest of life in jail….

Manafort is probably hoping for a pardon from Trump if he hangs strong….. 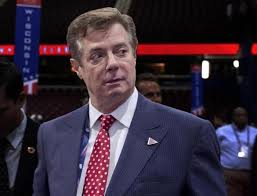 Paul Manafort, the former Trump campaign chairman, runs a significant risk of spending the rest of his life in prison and the evidence against him by special counsel Robert Mueller’s office seems strong, a federal judge declared in an order made public on Tuesday.

U.S. District Judge T.S. Ellis III, who is based in Alexandria, Virginia, and is assigned to a newly filed indictment against Manafort dealing with bank fraud and tax evasion, said the veteran lobbyist and political consultant posed “a substantial risk of flight” because of his assets and the gravity of his legal predicament.

“The defendant is a person of great wealth who has the financial means and international connections to flee and remain at large, as well as every incentive to do so,” Ellis wrote in an order setting the terms of what the judge called “home incarceration” for Manafort, 68, who lives in Alexandria but also has homes in Florida and on Long Island.

“Given the nature of the charges against the defendant and the apparent weight of the evidence against him, defendant faces the very real possibility of spending the rest of his life in prison,” wrote Ellis, an appointee of President Ronald Reagan…..