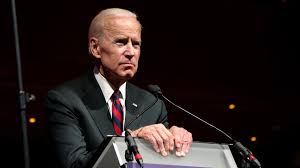 Joe Biden leads in the polling for Democrats who might be runningt for the 2020 Presidental nomination….

https://fivethirtyeight.com/features/how-happy-should-joe-biden-be-about-his-lead-in-2020-democratic-primary-polls/The former vice president sat out the 2016 presidential race, and has heard supporters say he would have defeated Trump if he’d been in the running. Trump triumphed over Democrat Hillary Clinton by winning the states of Pennsylvania, Michigan and Wisconsin — states Biden sees as practically his political base.

He’s touring the country to promote his book “Promise Me, Dad.” He has also been campaigning for candidates including Conor Lamb, the Pennsylvania Democrat who won a special election for the House earlier this month. The Hill reported earlier this month that Biden is expected to do another 30 to 40 events for Democratic House candidates, as he is a significant draw across the country.

Sources close to the vice president say there was no strategy behind Biden’s initial comments and that he wasn’t trying to provoke the president.

Instead, they suggested Biden just can’t help himself.

“He’s still pretty disgusted by the ‘Access Hollywood’ comments,” said one source close to the former vice president, adding that his comments simply underscore an issue “he cares about and is passionate about.”…

But Biden said “the jury’s still out” on whether he will challenge Trump in 2020.

After saying Tuesday that he would have “beat the hell out of” Trump in high school for the crude comments the president has made about women, Biden on Friday offered a wide-ranging discussion that focused mostly on his long career in public service, speculation that he could run for president and his assessment of the political divide in the country today.

“Honest to God I don’t know,” Biden said when he was asked by WNPR host Lucy Nalpathanchil, who moderated the discussion, about his plans for 2020. “I have to be able to stand in front of a mirror and look in the mirror and know that if I don’t run it’s not because I’m afraid of losing, it’s not because I don’t want to take on the responsibility, it’s because there’s somebody better to do it and/or because emotionally I’m not positioned to be all in. And so the jury’s still out.”….