She is single handily trying to take apart the way America educates it children….

And under hard questioning sounds like she needs to go back to school herself….

Being a Billionaire has not prepared for her for  her current job which she has held for over a year…. 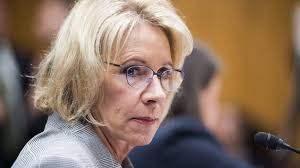 DeVos, who rarely gives interviews to journalists, is a longtime school choice advocate who once said that traditional public education is “a dead end,” and she has made clear that her top priority as the nation’s education chief is expanding alternatives to traditional public schools. She is  a champion of using public funds for private and religious school education, and critics say she is determined to privatize public education. DeVos has denied that.

DeVos, a billionaire who has spent millions of dollars on school efforts in her home state of Michigan, has been perhaps the most controversial of Trump’s Cabinet members. She became the first Cabinet nominee in history to need a tie-breaking vote from the vice president to be confirmed by the Senate. Her January 2017 confirmation hearing before the Senate education panel was marked by her inability to answer basic questions about education.

In the “60 Minutes” interview, more than a year after becoming education secretary, DeVos again had trouble answering questions and seemed to contradict herself. For example, she and Stahl had this conversation about what happens to underperforming traditional public schools when children leave for alternatives and take funding with them….