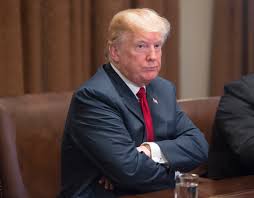 With the media blazing one Trump action after another?

The simple idea that the truth of a situation or matter is ran over by Donald Trump’s view of what HE thinks….

As we watch grown men and women bend like pretzel’s to follow behind Trump with priase and explinations about obvious falsehoods?

As we watch Trump’s zeal for secrecy extend outward to government….

As we watch his moves to get rid of ‘experts’ so he can direct those beholden to him to reshape the world in his image?

I’ve said this before here…

It’s gonna take the next Democratic President some time to undo the damage….

Trump’s move on tariffs was advocated strongly by Peter Navarro, director of the office of trade and manufacturing policy. Imposing new taxes on the import of steel and aluminum was controversial and apparently spurred Trump’s chief economic adviser to resign. Navarro, though, was all-in.

In an interview with Bloomberg, Navarro gave the credit for the plan to his boss.

“This is the president’s vision,” he said. “My function, really, as an economist is to try to provide the underlying analytics that confirm his intuition. And his intuition is always right in these matters.”

This, in a nutshell, is the operating philosophy of the Trump administration. What Trump says is correct and it is incumbent on those around him — even those engaged in theoretically objective analysis like economists — to reshape reality to conform. Sometimes that means making false statements. On other occasions it means making it impossible to establish what’s true and what isn’t….