Reuters is out with a piece that implies he did….

The view of Sessions recollection the he’strongly’  did NOT agree to a propsal that the Trump campaign set up a back channel to the Russina’s is in contrast to three witnesses Reuters reports…. 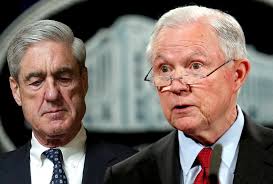 Perjury, is a separate  chargeable offense , even if there is no crime…It’;s up to Mueller’s people on how they would go at this…..

BTW?….Session has his own persoanl attorney…

Would Mueller present THIS to a grand jury for action?

Some Democrats have seized on discrepancies in Sessions’ testimony to suggest the attorney general may have committed perjury. A criminal charge would require showing Sessions intended to deceive. Sessions told the House Judiciary Committee that he had always told the truth and testified to the best of his recollection.

Legal experts expressed mixed views about the significance of the contradictions cited by the three sources.

Sessions could argue he misremembered events or perceived his response in a different way, making any contradictions unintentional, some experts said.

Jonathan Turley, a law professor at George Washington University, said Sessions’ words might be too vague to form the basis of a perjury case because there could be different interpretations of what the term pushing back means.

“If you’re talking about false statements, prosecutors look for something that is concrete and clear,” he said.

Other legal experts said, however, that repeated misstatements by Sessions could enable prosecutors to build a perjury case against him.

“Proving there was intent to lie is a heavy burden for the prosecution. But now you have multiple places where Sessions has arguably made false statements,” said Bennett Gershman, a Pace University law professor.

The March 2016 campaign meeting in Washington was memorialized in a photo Trump posted on Instagram of roughly a dozen men sitting around a table, including Trump, Sessions and Papadopoulos….