Donald Trump has been cleaning house…..

But thru all of this?

Ex-General…..Defense Sec Jim Mattis is STILL in office….No rumors of a departure… 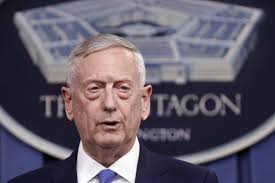 Trump had Mattis by his side when he signed off on the new spending bill…..

Most of us are praying that Mattis can keep America and his boss out of an ill-though out action that could put American’s in harm’s way….

Trump is said to divide the members of his Cabinet into first-tier “killers” and second-tier “winners.” Mattis is indisputably a killer, but he’s also something rarer: a sometime loser — of policy arguments, that is — who manages to disagree with the president without squandering his clout or getting under Trump’s skin. He opposed Trump’s decision to withdraw from the Paris climate change accord, decertify the Iran deal, slap tariffs on steel and aluminum, and move the U.S. Embassy in Israel from Tel Aviv to Jerusalem. He opposes the president’s proposed ban on transgender service members and has reportedly ignored requests from the White House to see plans for a military strike against North Korea.

Yet Mattis has been able to present the president with views he doesn’t like without bearing the brunt of his frustration. The departure of H.R. McMaster, his national security adviser, was announced Thursday amid rumors that the president is poised to fire beleaguered Cabinet secretaries like David Shulkin of Veterans Affairs and Ben Carson of Housing and Urban Development, and is agonizing over whether to dismiss John Kelly, his chief of staff. Mattis’ name has been conspicuously absent. One senior administration official called him “bulletproof.”

Of the Cabinet selections and staff picks cheered by Trump critics, including McMaster, Kelly and former chairman of the National Economic Council Gary Cohn, Mattis is the only one who seems to still have job security. Trump remains as enthused about Mattis, one of his first Cabinet picks, as he was when he tapped him for the job in December 2016, according to several White House aides.

Even his detractors on the right are reluctant to criticize Mattis, a retired Marine general who fought in both Gulf wars and Afghanistan, on the record, either because they are looking to join the administration or because, despite their disagreements, they are happy he’s there….